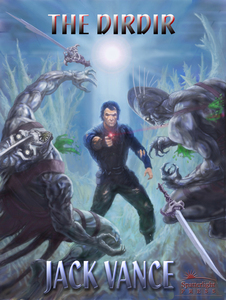 Adam Reith has failed twice to acquire a spaceship. He decides to build a ship from scratch, but this requires vast resources; his only hope is to win valuable sequins away from the terrifying realm of the Carabas, hunting preserve of the Dirdir. Even then, his greatest adversary is the cunning, monstrous Aila Woudiver...

Tschai is a planet orbiting the star Carina 4269, 212 light-years from Earth. It is populated by three alien, mutually hostile species; the displaced, native Pnume; and various human races, some of whom live as slaves or clients of the aliens. Each of the four novels relates Reith's adventures with one of the species, and is named after that species.