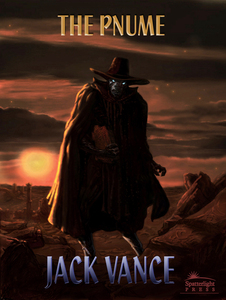 The Pnume are native to Tschai, living underground in a vast network of caverns with their human slave-species, the Pnumekin. Historians of Tschai, the Pnume collect its past with scholarly disinterest; they hear rumors of Adam Reith - a man who claims to come from another planet, named Earth - and they want him for permanent display in Foreverness, museum of Tschai life! Reith must survive the Pnume tunnels, if he is ever to return to Earth.

Tschai is a planet orbiting the star Carina 4269, 212 light-years from Earth. It is populated by three alien, mutually hostile species; the displaced, native Pnume; and various human races, some of whom live as slaves or clients of the aliens. Each of the four novels relates Reith's adventures with one of the species, and is named after that species.