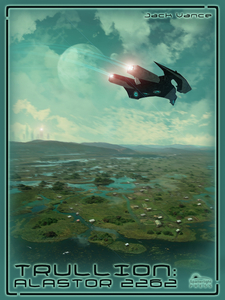 Trullion - world 2262 of the Alastor Cluster - is a water-world of fens, mists, and idyllic islands set in clear oceans whose teeming richness provides food for the taking. The Trill are a carefree and easy-living people, but violence enters their lives during raids of the Starmenters, freebooting galactic pirates who live short, perilous lives in pursuit of adventure, rape and pillage. Then there's the planet-wide game of hussade - when the Trill's passion for gambling drives them to risk all - even life itself, on the hazardous water-chessboard gaming fields. Their prize? The beautiful sheirlmaiden...