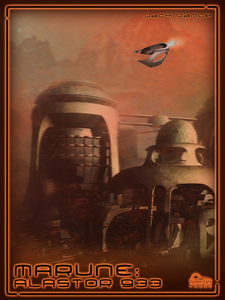 From his fabulous palace on Numenes, the Connatic rules the sprawling Alastor Cluster, and tracks the doings of each of his trillion or more subjects. But there is one man he knows nothing about; the past life of the wanderer called Pardero is a complete mystery. Pardero himself has two goals: first, to find out who he is, then to find his enemy- the person who stole his memory. He discovers that his home is the mysterious Marune , a planet lit by four shifting suns, and Pardero makes his way there- to be hailed as the Kaiark Efraim, ruler of the shadowed realm. Uncovering his lost identity had been comparatively simple, but finding his sworn enemy would be more difficult...