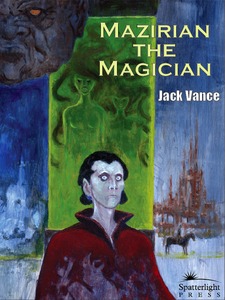 Jack Vance's masterpiece Mazirian the Magician (originally published in 1950 as The Dying Earth) has inspired generations of fantasy writers- from Gene Wolfe and Michael Moorcock, to Neil Gaiman and George R.R. Martin- and has deeply influenced today's realms of graphic novels, comics, and fantasy role-playing games (in particular, Dungeons & Dragons). The book contains six works of loosely-connected fantasy short fiction including "Turjan of Miir", "Mazirian the Magician", "T'sais", "Liane the Wayfarer", "Ulan Dhor", and "Guyal of Sfere". Set in a bizarre, darkly beautiful far future near the very end of Earth’s lifespan, wizards duel with spells of dreadful potency under a waning, almost burnt-out red sun. A must-read for any fan of fantasy.