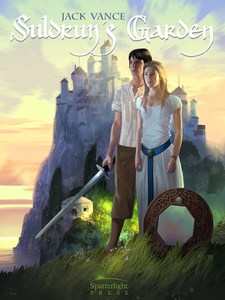 Take a doomed princess, a dispossessed prince and a wicked king, a vengeful magician and a melancholy witch; now add faeries, ogres, changelings, scheming barons, wanderers who are not what they seem, robbers, orphans, and a race of hardbitten warriors at war with all humanity. Stir in politics, intrigue, plots and assassinations, battles and sieges, then set it all to simmer in a mythical archipelago across the western sea before the time of Arthur.

Jack Vance draws together the threads of fairy tale and pagan myth to weave an epic tapestry of adventure and intrigue in the Elder Isles. The result is a masterpiece.

Suldrun's Garden is part 1 of 3 of Lyonesse