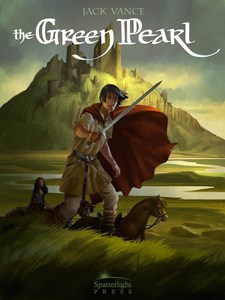 In the second volume of the Lyonesse trilogy, new threads are woven into the epic tapestry begun in Suldrun’s Garden. While war rages across the Elder Isles, King Aillas’s true love, Glyneth, is carried off to a parallel world by an amoral magician in the pay of the wicked King Casmir. Meanwhile, a sorceress’s malice, condensed into a green pearl, passes from hand to hand bringing poignant misery to whomever it touches.

Jack Vance conjures up a tale of war and politics, magic and derring-do, presented in the inimitable style that has made him one of fantasy’s acknowledged grandmasters.

The Green Pearl is part 2 of 3 of Lyonesse