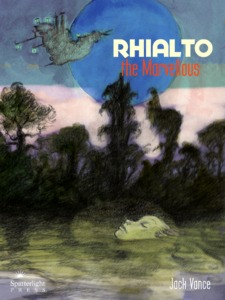 In the age of The Dying Earth, our moribund planet’s greatest magicians conspire with and against each other, playing cruel tricks and conniving to steal their rivals’ miraculous treasures. Prominent amongst them is Rhialto the Marvellous, who struggles to bring order – even some justice – to this squabbling gaggle of eccentrics and egotists. His efforts will take him back through time, and outwards to the farthest reaches of space – to the place where the mysterious and powerful IOUN stones wait to be gathered, by those who dare.

SF Grandmaster Jack Vance evokes a spellbinding world of politics and power set against the backdrop of a civilization as ancient as it is corrupt. From amidst the pride and cynicism of his fellow magicians, Rhialto emerges as an unforgettable figure of melancholy grandeur.