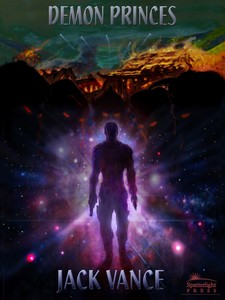 In a far-off future, criminals have the freedom to pursue their most violent passions among the civilized worlds of the Oikumene, assured that justice cannot follow when they escape into the lawless Beyond—a vast playground where the most elusive and monomaniacal murderers, thieves, and slavers can conquer a world of their own, play out complex fantasies of bloodlust, pursue revenge and immortality over generations, give themselves to a psychotic world of self-absorption, and devalue their neighbors' property values.

Five of the most quixotic and efficient killers in the Gaean Reach gathered to execute a joint venture, slave-taking on the colony world of Mount Pleasant. One survivor of that raid dedicates his life to mold his grandson, Kirth Gerson, into a seeker of justice and executioner of these five. Gathered in this unified offering is the tale of Gersen's revenge.

Gersen's tale begins with The Star King on the backwater of Smade's World, and covers five manhunts that span known space. Gersen, himself a part-time operative for the stellar Interpol, the IPCC, becomes a counterfeiter, kidnapper, and more as his destiny dictates.

Jack Vance marked his entrance to the field of large scale science fiction with this series. Settings range from Sailmaker Beach on oceanic Alphanor of the Rigel Concourse, to the deserts of Dar Sai, the poisoners' steppes of Sarkovy, and an incredible variety of other worlds of the Beyond. We are introduced to Mankind's loose confederation of settled space, the Gaean Reach, which figures prominently in many of Vance's later tales.

The Demon Princes offers vividly imagined and meticulously fleshed characters who inhabit a universe of fantastic environments and deadly perils. Kirth Gersen's antagonists are exemplars of excessive self-esteem and artistic flair for the sadistic and ironic. There isn't a slow moment as Gersen works to keep his skin intact while pursuing some of the most interesting and flamboyant criminals in SF.