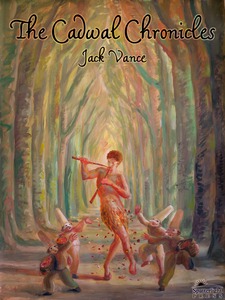 For centuries the breathtakingly beautiful planet Cadwal has been held in trust by a centuries-old Charter of Conservancy, created by the now-defunct Naturalist Society on Old Earth.

Over time, restrictions on population expansion written into the Charter have become irksome to some who live on Cadwal—those who would take the unexploited wealth of Cadwal for themselves, also those forced to leave the planet to keep population in check.

Glawen Clattuc grows to manhood within the insular community of Araminta Station, the primary settlement on the planet, and becomes attuned to conflicts among the parties wishing to break free of the Charter. He joins the Constabulary, and ties mysterious events and circumstances together. To uphold the Conservancy, much depends upon locating the original Charter document, which has been lost for many years; Glawen is chosen to search for the Charter, on backwater Earth and worlds beyond.

The Cadwal Chronicles was written by Vance in his maturity- an accomplished master sure of his game- using a light touch and broad palette of characters.