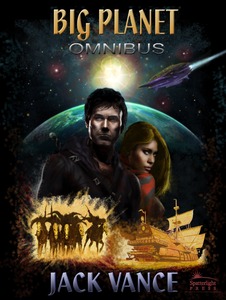 The star Phaedra shines on Big Planet, a low-density world three times the diameter of Earth. Colonized long-ago during the first expansion of stellar colonization, the legions of original settlers—characterized by cultural eccentricity, extreme views, and disaffection with their fellow man—have scattered over the far horizons.

In the story Big Planet, we meet Claude Glystra, Executive Chairman of an Earth Central commission sent to investigate the activities of Charley Lysidder, the notoriously cruel, self-styled Bajarnum of Beaujolais. After a murderous sabotage and crash landing on Big Planet, Glystra is stranded 40,000 miles from refuge. He learns that Lysidder is expanding his empire, and will brook no interference. Anarchy is everywhere; a panorama of oddly introverted social arrangements and outright brigandage meets Glystra on his journey to confront Lysidder.

We return to Big Planet in The Magnificent Showboats of the Lower Vissel River, Lune XXIII South, Big Planet (original title, previously published as Showboat World) to follow the picaresque adventures of shipmaster extraordinaire, Apollon Zamp. Zamp's vessel ‘Miraldra’s Enchantment’ travels the length of the river Vissel to Mornune, where Zamp hopes to win a rich purse at King Waldemar’s Grand Festival. His competitors are many, and treacherous, and include arch-rival Garth Ashgale—master of ‘Fironzelle’s Conceit’. Among plays, musicals, and farces at the many towns along the way to Mornune, unfortunate misunderstandings, egos, and outright artistic sabotage fuel many amusing episodes; the sensibilities of dog-barbers, clam-diggers, and the disinterested in general are often offended by Zamp’s attempts to present the classics. The vastness of Big Planet provides Vance unlimited scope to exercise his talent for storytelling.