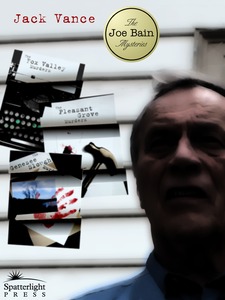 The responsibilities of the acting sheriff are suddenly complicated—in a dangerous way—when residents of Fox Valley and Pleasant Grove begin to die under violent and unlikely circumstances. Acting Sheriff Bain is caught between the political necessities of an upcoming election, and the urgent need to solve grisly crimes committed against ordinary folk of Rodrigo County.

Published together in the Joe Bain omnibus are The Fox Valley Murders and The Pleasant Grove Murders, hard-to-find examples of Jack Vance's masterful detective fiction from the '60s. Vance brings rural California from a half-century ago to vivid life, and introduces a variety of intricate characters with all the detail readers expect from his fantasy and science fiction works.

These two books, with an accompanying outline for a third entry in the Joe Bain series, The Genesee Slough Murders, demonstrate Vance's ability to transport his readers into a seamlessly-crafted locale, teeming with believable characters who grab your interest from the first page.