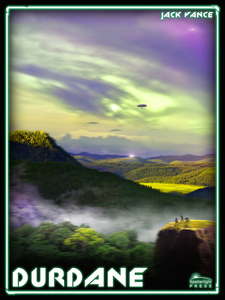 On the fringes of the Gaean Reach, the planet Durdane is united under the federation of Shant, and ruled by the reclusive Anome—who coerces the population using explosive rings around the neck of every adult citizen. The Durdane trilogy (The Anome, The Brave Free Men, and The Asutra) follows the life of Gastel Etzwane, who grows from childhood in the dust of Rhododendron Way to become a musician of renown, and almost against his will, a man of action.

When remote cantons are brutalized by the depredations of inhuman Roguskhoi, Etzwane goes before the Anome with a case for response. The Anome proves oddly reluctant to act, and Etzwane must stage a coup to turn Shant against the hordes. Eventually he discovers the sinister fact that the Roguskhoi tribes are pawns of the Asutra, alien elements who seek to bend all of humanity to a disturbing end.

The Durdane Omnibus traces the rise, struggles and ultimate triumph of Gastel Etzwane—and through him, of humanity itself—over alien subjugation.